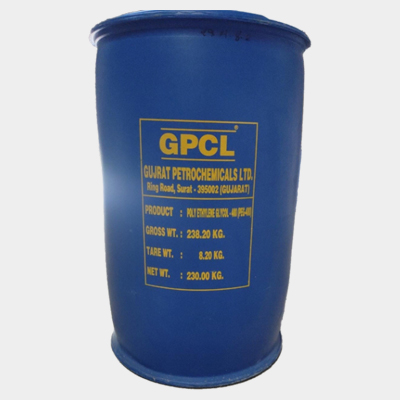 PEG 400 (Polyethylene Glycol 400) is a low molecular-weight grade of polyethyleneglycol. It is a clear, colorless, viscous liquid. Due in part to its low toxicity, PEG 400 is widely used in a variety of pharmaceutical formulations.

It is an effective ingredient, which finds application in variety of industries like food, pharmaceuticals, textile, chemical, biological and even the manufacturing process of polymers. Well, PEG or Polyethylene Glycol tends to be solvent in water, ethanol, methanol, acetonitrile, dichloromethane and benzene On the other hand, it is considered insoluble in diethyl ether as well as hexane. On getting joined with hydrophobic molecules on usage, PEG is intended to manufacture non-ionic surfactants. Apart from this, PEG happens to contain potential toxic impurities like dioxane and ethylene oxide.

We serve the following industries :